My friend Bob, who writes delightful comedy, once asked me why I write dark fantasy. I explained it was because I didn’t want to gloss over the fact that in real life bad things happen. But, I said, my books are also full of hope and always lead to a light at the end of the tunnel. I write what I do because, for many, life is not always a bowl of cherries.

It sure wasn’t for a woman I got to know when I was a pastoral minister at our church: Mary Rose. Hers was one of the first funerals I attended at the beginning of this year. I mention it because this dark event yielded up a real insight.

Our church pastor, and my former boss, stood up to give the homily and I wondered what he was going to say. Mary had been hammered by almost unbelievable losses in her life.

Three of her children were cut down as young adults – one after another, in spite of everything the doctors could do – by a rare form of cancer. Incredibly, another daughter was killed in a car accident on the way to her brother’s funeral. Then Mary’s husband succumbed to cancer. Things looked up a bit when Mary’s remaining son and his wife had two little boys. One, again incredibly, fell to his death while the family was visiting his grandparents in India. Another died as an infant from a fatal heart disease. Mary herself was killed as a result of a broadside accident while being driven home from visiting her remaining little family in North Carolina.

So Fr. Mike got up and addressed the son, daughter-in-law, and their now three children who were among the many others who attended Mary’s funeral. He reminded us that throughout all the years of grieving Mary held on to her faith and courage. “It is what it is,” she used to say, “and we move on.” She helped other bereaved families, did laundry for the homeless people sheltered in our church, and worked hard as a volunteer for our Christian Service Commission Then Fr. Mike put forth a remarkable thought. “Our losses,” he said, “can define who we become.”

That took some unpacking for me. But it reminded me of when we were in Italy and I saw Michelangelo’s enormously moving statue of the David. I don’t think I’ve ever been struck so hard by any other work of art. Yet, I learned, the David started out as a fairly nondescript block of marble, with a crack in it even. The sculptor worked away at it, determined, he said, to release the form inside. As more and more of the block got chipped off, David started to emerge. I’m sure if that block of marble were sentient, it would complain it didn’t want to be hammered, that it hurt to lose so much of itself. But slowly it became transformed, into one of the world’s most awesome sculptures. The chunks that it lost in some way defined what it became.

Such an insight, like life itself, can be both heart-breaking and beautiful. The dark can bloom into something full of light – like Mary of Magdala found out, like J.R.R Tolkien wrote about, like a lot of people discover even in the midst of grief.

Or like in my book Blood Seed, when Sheft discovers “It is what it is,” and makes the hard decision to move on. He, along with his brother in Dark Twin, and his beloved Mariat in the upcoming Time Candle, work their way through the same feelings of loss that many of us do. But we do it in the hope so well declared by Julian of Norwich in her Enfolded in Love: “All shall be well, and all shall be well, and all manner of things shall be well.”

Vernie Dale is an established author with Detroit Working Writers, and a member of Phi Beta Kappa and the Alliance of Independent Authors. Her first fiction book, Night Cruiser, was published in December 2014, followed by Blood Seed and Dark Twin in 2016. She is a former librarian and has a background in pastoral ministry. If you’d like to join her email list – this blog is an example of what she sends out – sign up at her website http://veronicadale.com “I won’t spam you,” she promises, and reminds everyone they can unsubscribe at any time.

Portals: A Memoir in Verse 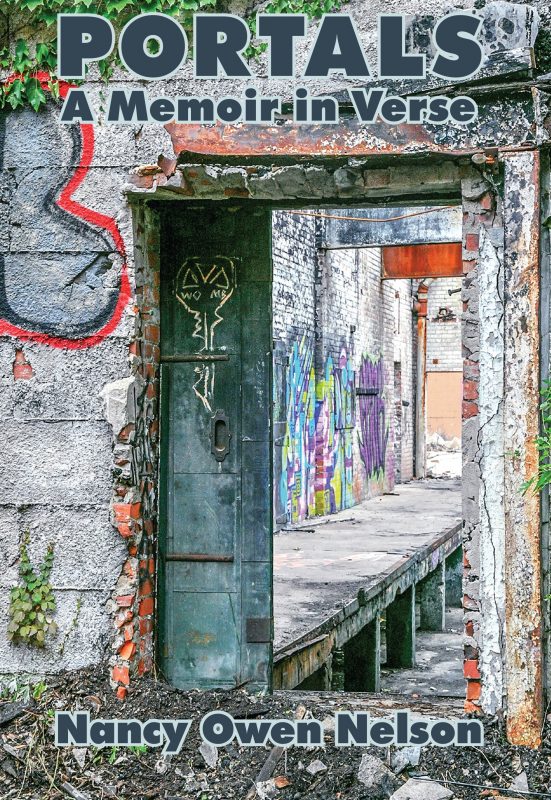 In "Portals: A Memoir in Verse," we enter Nelson’s liminal dreamscape into poems populated by Beckett, Godot, Hemingway, even Johnny Cash, who have passed through an aperture filled with light and longing, transfixed in time and space. Portals is a collection filled with moving elegies and profound meditations on the seminal moments when one is transported to another plane via myriad conduits. Nelson’s astute introspection transfigures even the minute moments in life, making this a collection worth savoring and returning to again and again.
Kelly Fordon, author of Goodbye Toothless House, a poetry collection, and Garden for the Blind, a novel-in-stories.

Can be purchased from: https://kelsaybooks.com/products/portals?_pos=1&_sid=b4333cf32&_ss=r