The editors of Poetry Foundation wrote that “In the last 100 years, perhaps no other artistic medium has provided more fodder for poetry than the cinema. Movies have become central to the poetic imagination, whether the poet celebrates the movies or reacts against celluloid saturation.”

There are various aspects of a film that can inspire the making of a poem, from identification with a character to concrete images that resonate. Poet Frank Bidart, discussing his poem that actually ends with a sentence by the actor Heath Ledger, says, “Crucial to getting a character to speak in a poem is hearing in your head as you write the way the character talks. Because a poem is made up of words, speech is how the soul is embodied. (Ledger asserts, of course, that even in a movie this is true.) What’s crucial is that how the words are set down on the page not muffle the voice. When I first began writing, writing the voice down in the ways conventional in contemporary practice seemed to muffle or kill the voice I still heard in my head. If I lost that voice, I knew I had lost everything. I’m grateful to Ledger for saying more succinctly than I have ever been able to what I had felt since I began writing.”

Poem Ending with a Sentence by Heath Ledger

Each grinding flattened American vowel smashed to
centerlessness, his glee that whatever long ago mutilated his

mouth, he has mastered to mutilate

you: the Joker’s voice, so unlike
the bruised, withheld, wounded voice of Ennis Del Mar.

Once I have the voice

the end
of the line

and attached
to that

Choose a movie for inspiration the way you’d consider a piece of art for ekphrasis. What is it about the film that speaks to you? A good film, much like a fine poem, begins with shaping the of raw material. Perspective and emotional weight are further refined through editing. When it comes to revision in poetry, the objective is similar. How do we shape our words into something that succinctly tells the story, delivering maximum punch with a minimum of words?

I’ve written a number of poems inspired by movies. One refers to a love scene in Punch Drunk Love. The scene exquisitely captures the protagonist’s existential sense of feeling alone, odd, an outsider, and how he, in that moment, feels safe enough to risk revealing his deep inner-self. It’s a small moment of discovery that’s powerfully brought to life via the woman who “gets” him, and speaks his language. Like the experience of a good poem, it connects him to her, to the greater world, and to us. Here’s a poem of mine recently posted on the Great Lakes Commonwealth of Letters website: Punch Drunk Love
—after the movie

A loner, prone to fits of rage, he lies on top,
his nose an inch away from hers, says,
“I want to smash your face, it’s so pretty

I want to smash it with a sledge hammer.”
There’s a long pause. Her eyes searching
as if to reach inside him. And I’m afraid

of what she’ll find, until I realize she heard it as
Your face is unbearably pretty. I’m scared of
the way it makes me feel. I watch his

reaction when she says, “I want to scoop out
your eyes and eat them.” How he hears
I love the way I see myself in you, I want that

inside me. They kiss like ice cubes melting
in Scotch, and I remember what it means
to be invisible, wandering the city,

an outsider even my mother never knew.
I walk down Grand River Avenue
along the Redford cemetery, a ghost

who cannot hide the scent that stray dogs
chase, the mix of fear and tough from
tramping in wilderness too big to mark.

the other without knowing–and
I see myself–heart with the teeth
of a dog that never means to bite.

Want to learn more? Join me for an advanced poetry workshop I’ll be teaching for Springfed Arts this fall, where we’ll explore the relationships between imagery, imagination, and poetry through a variety of forms. One session will highlight film as a writing start. We’ll examine how the words on a page come to life through imagery, and further, how physical, emotional and intellectual imagination are highlighted through voice, and honed by revision. To register, visit springfed.org.

Next Post: How Dark Fantasy Can Bloom into Light »

I Can See With My Eyes Shut Tight 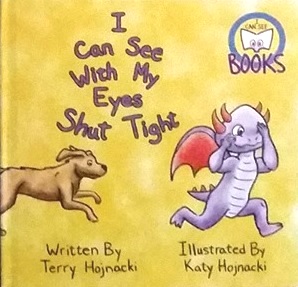 I Can See With My Eyes Shut Tight (ages 2 - 6) is a children's concept book encouraging readers to use their imagination while exploring all their senses. This book can also be used to teach an understanding of what it might be like if you didn't have one of your senses. What if you couldn't see? How can your other senses help create pictures just for you?