I’m sitting in my monthly book discussion group, and we are talking about Jane Eyre (every year we discuss one classic novel). The talk surrounds me, sometimes quite heated: what are we to make of Mr. Rochester? We all agree that Jane is independent, with a strong moral compass—so what is there about this man who is sometimes demanding and sometimes playful, who seems angry so much of the time (and who, though Jane doesn’t know it, keeps his mad wife hidden in a third floor apartment) that attracts the strong-willed Jane? Some say, “Sometimes people make terrible mistakes in love.” Others say, “Not Jane, she’s too smart, too independent, too morally driven to do that. There must be something she sees in him—she doesn’t even think he’s handsome.” (Though in the film versions he usually is.)

In all this, I am convinced of one thing—well, two, actually. One is that Charlotte Bronte knew what she was doing, and that we are meant to sympathize with Jane and Mr. Rochester. Does she not bring them together happily in the end? Is this not a clear indication of where Bronte’s sympathies lie? And the other thing is that someone ought to write Edward Rochester’s story; someone ought to help us understand him and why he acts and does what he does. The book discussion ends and I leave for home, but by the time I am halfway there I have challenged myself: I am going to write that book.

Easy to say! The first thing I do is buy a paperback of Jane Eyre, so that I will feel free to underline, write in the margins, dog-ear pages, and generally make a mess of this book. And as I read it—and re-read it—I pay special attention to the Mr. Rochester parts. I make flagrant use of colored post-its to flag noteworthy passages: pink for Jane and blue for Mr. Rochester (how traditional!), white for other characters, green for descriptions of places.

And then I read—and read—other novels by Charlotte Bronte and her contemporaries, and biographies of them as well. I read for language, for rhythms, for how people in early nineteenth-century England (and Jamaica and France) talked and how they lived.

After all this, I start to write Edward Fairfax Rochester’s life. And that is when I really come to understand that it is not going to be a piece of cake. Writing the story of a character who already exists on paper and in people’s minds is like writing the biography of an actual person.

Everything has to fit what the reader already knows—or thinks. If the reader is mistaken, the text has to gently show the reader how he/she has misunderstood. Even the slightest detail cannot be overlooked. At one point I am writing along, about to send Rochester to Jamaica, and in rereading the portion of Jane Eyre where Rochester tells about going there, I read a short phrase that had never caught my eye before: “When I left college . . .” Oh my gosh! He went to college? Why did I not notice that one little word: college. And everything stops while I research what college was like two hundred years ago. Or, more notably, everyone knows that Mr. Rochester kept his mad wife hidden in the attic. But was it really an attic, or was it simply a room (or a suite?) on the third floor, the same floor where the servants’ rooms were, but walled off from them so as to keep it secret? And, toward the end, when everyone who has read Jane Eyre already knows what happens, what’s to keep them reading? Unless of course there are things that Jane does not know . . . Sarah Shoemaker (better known to long-time DWW members as Sarah Wolf) has been a member of DWW for 30 years. Twenty years ago she moved from Livonia “up north” to the Leelanau Peninsula, where she recently re-discovered the joys and anguish of writing a novel. Mr. Rochester will be published May 9, 2017, by Grand Central Publishing (used to be Warner Books). Sarah has just been invited to be one of 5 authors to talk about her new book at the national convention of the American Library Association this summer in Chicago! 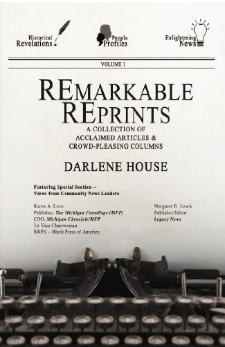 Remarkable Reprints: A Collection of Acclaimed Articles and Crowd-Pleasing Columns Enjoy reading and rereading this collection of enlightening and inspirational newspaper and magazine articles and columns.